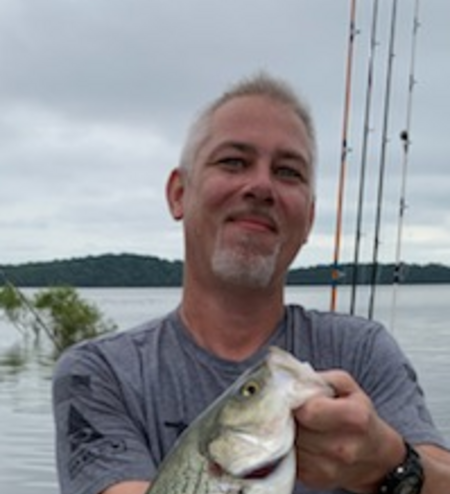 Christopher Richard Rush was born March 18, 1978 in Leavenworth, Kansas. He died October 17, 2020 in Kansas City, Missouri. He was 42.
Chris, lovingly nicknamed Muskrat by Dad, left us too early and unexpectedly, following complications from diabetes.
The baby of the family, he was silly, stubborn, ornery, and generous. As a child he loved all things about the outdoors, hunting, fishing, and camping.
In the family tradition of the Rushes, he was a Boy Scout. In fact, one of the worst punishments he could receive as a kid was to be grounded from wearing his favorite camo clothes.
As an adult, if he could shoot it, sharpen it, or blow it up, he was having fun. But that doesn’t mean he was a rowdy redneck. Quite the opposite. He was an ethical outdoorsman who learned a love of nature from Dad and Mom. And he loved sharing his knowledge with others.
He also had an artistic side. Playing lots of different instruments as a kid. Designing beautiful handcrafted duck calls as an adult. Fixing up old cars with his best friend Paul.
But hobbies don’t define a person. More importantly, Chris cared deeply for family. He both lived and worked with his brother Monty at various times over the years.
His social network centered around cousins Todd, David, and Jeff and a close-knit group of friends that feel like family. Although he didn’t like to show his sentimental side, he had a real soft spot for his nieces Cassidy, Chloe, and Cora, even when he admitted he didn’t really get girls.
Maybe because of that, he tried harder to find ways to connect with them. He was much more comfortable talking about hunting with his nephew Scott or cousin Alec.
Fiercely independent, he gave Mom and Dad their unfair share of worries. When he was a toddler, Mom told big sister Tracy, eight years Chris’s senior, to keep an eye on him to make sure he didn’t get into the knives in the silverware drawer…which he proceeded to do. Tracy apparently wasn’t a very good babysitter.
That sense of adventure continued. Whether it was going to the ballet or musicals, learning how to do 3D printing, cooking up award winning appetizers or smoking the absolute best ribs. And there were so many fun traditions. J.R Rush Trout Derby. BOHICA. The annual appetizer competition.
School was not his thing. But after barely making it through high school, he went on to get an associate’s degree as an adult, graduating Summa Cum Laude, an achievement he only recently shared with family. Life wasn’t easy for Chris, but he had just started a new job that he was excited about.
Words are so inadequate to describe a man, a son, a brother, a friend. But words and memories are all we’ve got. We invite you to share yours on the Tribute Wall for Chris’s obituary at https://www.johnsoncountychapel.com/listings
Chris is survived by Dad and Mom, Dennis and Suzanne Rush, brother Monty King and sister Tracy Bennett, three nieces and two nephews.
A Memorial Service will be held on Thursday, Oct. 22 at 11 AM at Northland Baptist Church, 7101 Waukomis Dr., Kansas City, MO 64151.
We invite you to wear face coverings and to sit with your family units, socially distanced from others.
A brief graveside service will take place at 1 PM at Johnson County Funeral Chapel and Memorial Garden, 11200 Metcalf Ave., Overland Park, KS 66210. Please follow map directions for entering the cemetery.
We won’t be departing in a processional. Friends and family are invited to gather to share a meal and memories afterwards at the home of Tracy and Greg Bennett, 7804 NW Rosewood Circle, Parkville, MO 64152.
In lieu of flowers, contributions are suggested to go to the Summit Christian Academy, Alec Rush Endowment Fund, which is used for the DASH Award, a Memorial Scholarship.
The DASH Award represents the dash between your date of birth and your date of death. It represents how you lived your life. Alec lived his DASH for Christ.
Contributions can be made online. Use the Private Message section to indicate funds are for “Alec Rush Endowment.” As an alternative, checks can be made payable to Summit Christian Academy. Write “Alec Rush Endowment” in the memo and mail to Alec Rush Endowment Fund, c/o Summit Christian Academy, 1500 SW Jefferson, Lee’s Summit, MO 64081.