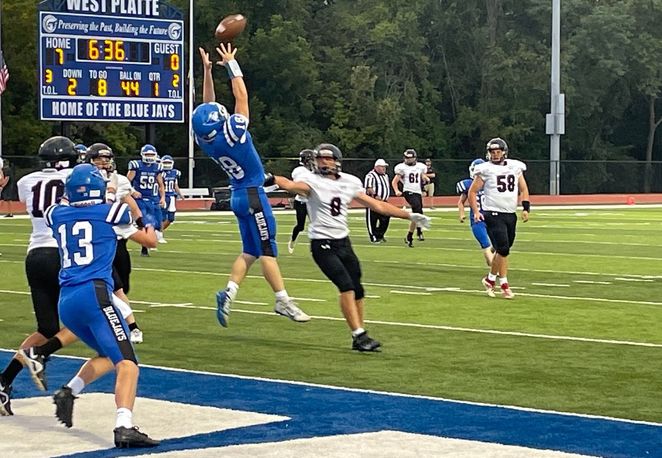 (One week after being blanked by Mid-Buchanan 44-0,  Coach Jim Newsted said “Blue Jays came out on fire on homecoming night.”  West Platte scored early and quickly to start the game and led 32-0 at the end of the first quarter on the way to a 48-0 win.
The Blue Jays received the opening kick off.  Christian Larabee rushed the first three plays to gain 30 yards to the Tiger 15 yard line.  Dalton Woodard took over for the next 4 plays, scoring on a 3 yard run.  With Alex Allison kicking the extra point the Blue Jays led 7-0 with only 2 and a half minutes into the game.
With 6:33 left in the first quarter quarterback Kane Cogan completed a 9 yard touchdown pass to Peyson Chandler.  The two point conversion was no good and the Blue Jays led 13-0.  At 4:23 Dalton Woodard scored his second touchdown on a 28 yard run.  After Colton Kite intercepted a Plattsburg pass McClain Zrendajas scored on a 3 yard run with 1:51 left in the first quarter.  Gunner Smith recovered a Plattsburg fumble.  Afton Buckler scored on a 30 yard run at the 1:29 mark and the Blue Jays led 32-0.
Dalton Woodard scored his third touchdown with a 3 yard run and with a Alex Allison extra point then Blue Jays took a 39-0 half time lead.
In the third quarter McClain Zendejas scored his second touchdown on a 6 yard run and Alex Allison kicked a 20 yard field goal for the game’s final 48-0 score.
In explaining the game plan, Coach Jim Newsted said “We also decided as a staff that offensively we had to find ways to spread the ball around in our play calls and defensively we had to be more aggressive in our decisions while being sound in our pass defense.
“The offensive game plan held strong with 4 players having great nights with the ball in their hands.  Christian Larabee had 7 carries for 109 yards, Dalton Woodard had 92 yards and 3 touchdowns, Afton Buckler tallied 95 yards and a touchdown and McClain Zendejas had 5 carries and 2 of them were touchdowns.
“Kane Cogan threw the ball 6 times completing 3 of them with one completion to Peyson Chandler for a 9 yard touchdown.  Cohen Kite also reeled in 2 catches for 28 yards.”
The Blue Jays had 496 yards of offense, 443 rushing and 52 passing.  Offensive coordinator Taylor Gallagher was effective in spreading the ball around and keeping the Tigers defense on their heels.
Coach Newsted complimented defensive coordinator Brett Swope for his “aggressive mindset.”  According to Newsted Swope “relied on the threesome of ‘Peyson Chandler, Lane Scott, and Christian Larabee.  This trio led the defense with a combined total 30 tackles, including 7 tackles for loss, and 2 sacks.  Cohen Kits also had a big interception in the first quarter to kill the only real positive drive the Plattsburg Tigers had.”
This Friday night the Blue Jays host the Lawson Cardinals in a Conference game.  Lawson comes to West Platte with a record of 2 wins and 2 losses including a win over Penney and a 35-0 loss to Mid-Buchanan in the conference. 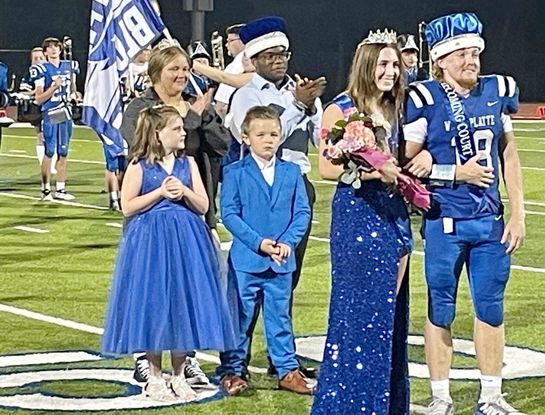 For all of our news in full, please see this week's print and/or e-edition of the Weston Chronicle